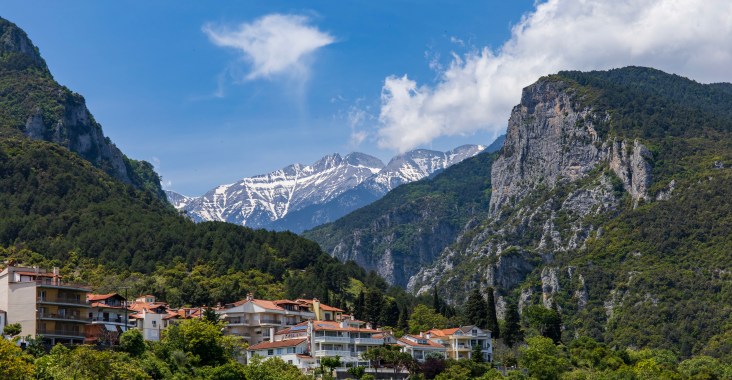 Pieria is one of the regional units of Greece located in the southern part of the Region of Central Macedonia, within the historical province of Macedonia. Its capital is the town of Katerini. The name Pieria originates from the ancient Pieres tribe. In Pieria, there are many sites of archeological interest, such as Dion, Pydna, Leivithra and Platamonas. Pieria contains Mount Pierus, from which Hermes takes flight in order to visit Calypso,[1] and is the home of Orpheus,[2] the Muses,[3] and contains the Pierian Spring. Mount Olympus, the highest mountain in Greece and throne of the ancient Greek gods, is located in the southern part of Pieria. 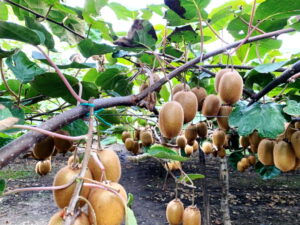 The Pieria regional unit is bordered by Imathia to the north, Kozani to the west, and to the south and west by the region of Thessaly’s regional unit Larissa. The Pierian Mountains lie to the west; the Thermaic Gulf lies to the east. It also has a valley by the GR-13. Most of the population live within the Olympian Riviera. The lowest point is the Thermiac Gulf and the highest point is Mount Olympus.

Its climate is mainly of Mediterranean type with hot summers and cool winters. Severe winter weather is common in the central and western parts of Pieria, especially in the Pierian Mountains and on Mount Olympus.

The kiwifruit is cultivated in many places in Greece, Pieria, however, remains the main area of production. The industry depends on a single cultivar, the ‘Hayward’. The total production in the last 3 years 1992, 1993 and 1994 was approximately 46,000, 46,000 and 35,000 tons, respectively. In recent years there is only a very small increase in acreage because of the low prices and the difficulty the farmers face in selling the produce. From the quantities produced 30–60% are exported to various countries (65% to EU and the rest of it to other countries).

The usual planting distances applied are 5x4m and 1:7 ratio male/females. T- bar and pergola are the main systems of training the vines. The Winter pruning applied is the medium one (12–15 nodes). Summer pruning is applied when it is required (July-August). Fruit thinning (one fruit/node) is applied when it is necessary. Fruits are harvested in October-November and the exact date of harvest is determined by measuring the SS content (>6.2%) of the fruit. Fruits are usually stored under regular storage conditions till April.

The main concern of the research people and the farmers as well is how to produce, keep in storage and deliver into the market fruit of high quality with the lowest cost. Research activities include propagation, frost protection, nutrition, fruit set-growth-thinning, maturity indices, storage performance, marketing.