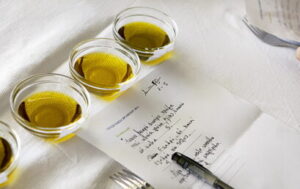 The history of the olive tree in Greece predates that of the Greeks, as attested by the discovery on Santorini of petrified olive leaves estimated to be 50,000-60,000 years old. Ancient texts and age-old tombs also teem with evidence of olive production, while Homer described the fruit’s precious oil as “liquid gold” and Hippocrates believed it to be “the great healer.” The goddess Athena, in fact, is fabled to have given the Athenians the first-ever olive tree, the Moria Elaia.

If the Peloponnese in particular had a symbol, it would be the olive, treasured throughout Greece but revered here. Olive oil in the Peloponnese is a source of pride, its trademark, and the tree’s cultivation is the main activity of the region’s largely agrarian communities. The oil is a medicine and a remedy, an elixir, a drizzle of which can liven up any dish or salad.

The olive is harvested with care, by laborers with long poles atop ladders who gently shake off the fruit into large swathes of cloth to protect it from bruising. The fruit is then ground by large millstones and slowly churned in a process known as malaxation to gradually extract the precious oil, drop by drop, which is stored in large steel tanks to prevent oxidization.

From the hills to the plains, the Peloponnesian earth is conducive to olive growing, with good drainage, constant rejuvenation thanks to favorable winds that stir up the soil, proximity to the sea and a temperate climate.

The main variety cultivated throughout the Peloponnese is the Koroneiki. On the eastern coast they also grow Manaki and in Laconia, in Sparta and its environs, Athinolia is widespread. Each of these has its own distinctive flavor profile. Koroneiki produces bold and slightly bitter oil; Manaki is more balanced but full-bodied; and Athinolia is smooth, fruity and fragrant. The varieties are also blended, usually on a robust Koroneiki base. Mixed with Athinolia, it gives a strong yet fragrant oil, while with Manaki the result is a more balanced, well-rounded bittersweet flavor.