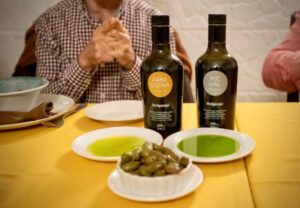 Jaen is the largest producer of Olive Oil in Spain and also world-wide. Just the province of Jaen produces more than the second largest producer country, Italy. With more than 550.000 hectares of olive tree fields and over 60 million trees, it produces 20% of the world’s Olive Oil.

The province of Jaen proclaims itself the “World’s Capital of Olive Oil”, being the place with the largest amount of olive trees and olive oil production world-wide. The most common olive variety in the province is Picual, although other varieties like Royal, Arbequina and Cornicabra are also used.

Acting as the world’s capital, Jaen hosts a large number of events related to the Olive tree and Olive Oil. Among them, the International Fair of Olive Oil and related industry stands out as the most important event at the international level on Olive Oil and its production.

The lands of the province of Jaen are covered by more than 60 million olive trees spreading from the plain near the Guadalquivir river to the point in which they merge with the pine forest in the mountines.

This vast amount of olive trees makes of Jaen a lush and fertile land, in which the extension of olive tree orchards barely allows the visitor to see the earth underneath them, forming this silver-green mantle so common in this region that makes it an automatic comparison with a “sea of olive trees”. The province of Jaen could still be crossed by a squirrel without setting foot on the ground, like the old say referred to the whole Iberian Peninsula in ancient times.

The vista of the sea of olive trees is most stunning in the region of La Loma (The Hill) due to its prominent position over the meadows of the Guadalquivir and Guadalimar rivers. La Loma produces over one quarter of Jaen’s Olive Oil. The towns in the province of Jaen that stick out due to the enormous volume of oil produced are, in order, Ubeda, Villacarrillo, Martos, Baeza, and Vilches.

A special mention deserves the town of Martos, known as the “cradle of the olive tree orchard”. There is even a local variety of olives: Marteña (Picual). Martos has earned the nickname of “First olive oil producer world-wide”.