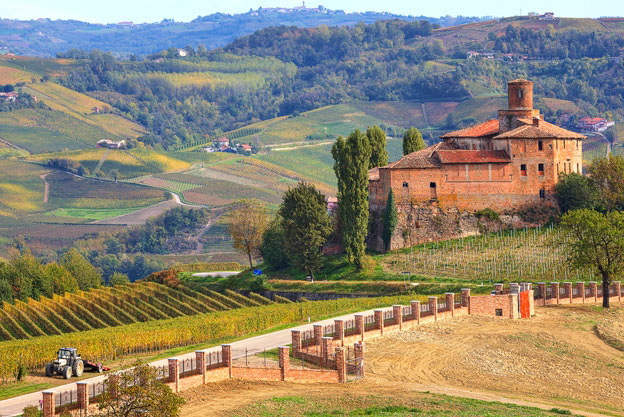 For Italy, Piemonte is a wine region to which grape varieties are the key. The region’s great, intense, subtly perfumed, alcoholic, long-lived, occasionally unbearably tannic red wines owe everything to the finicky, local speciality, the late-ripening Nebbiolo vine.Yet enormous quantities of much juicier lively Barbera and softly mouth-filling Dolcetto are also grown, as well as some local rarities such as strawberry-flavoured Brachetto, curiously sweet and sparkling Freisa, light and tangy Grignolino and historically interesting Ruché or Rouchet.

Although the historical essence of Piedmontese wine was as single, 100% varietals, an increasing number of producers now experiment with blends: Nebbiolo blended with Barbera, Merlot, Cabernet or even Syrah.

Piemonte’s most friendly wine is Dolcetto, which should burst with fruit while being impressively deep-coloured and, often, quite alcoholic. Dolcetto is particularly useful for growers because, unlike ultra-fussy, late-ripening Nebbiolo, it will ripen even on less favoured sites, even north-facing ones.

It is beyond question, however, that Piemonte’s greatest wines are Barolo and, generally very slightly lighter and earlier maturing, Barbaresco.

Wines were traditionally, as throughout Italy, matured in large, old Slavonian oak oval casks, but the importation of French barriques in the 1970s and 1980s caused a stir and some revision of wine styles, making some of them more open and less distinctive (or, to put it another way, earlier maturing and less cussed). Much has been made of the modernists v. traditionalists debate in the Langhe, but in truth the wines have in general gently evolved so that none of Nebbiolo’s extraordinarily haunting resonances, reminiscent of violets, tar, truffles and sometimes roses, is lost, but these relatively expensive wines are approachable after a decade or so in bottle – and sometimes even earlier.

Even the colour of the wines seems to have changed. Traditionally Barolo and Barbaresco were not notably deep-coloured and often had an orange tinge at only a few years old. Today the wines are in general much deeper-coloured and more likely to be crimson than orange. This may be partly because of the evolution in winemaking and partly because, like Pinot Noir in Burgundy, the Nebbiolo grape mutates easily and has been adapting itself to local conditions. But there is many a whisper that these deeper colours owe much to a judicious slug of Barbera or even Cabernet or Merlot – even if Barolo and Barbaresco have officially been meant to be 100% Nebbiolo.