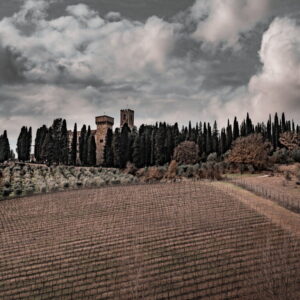 In addition to being the birthplace of the Renaissance, Tuscany is central Italy’s most important wine region—and the country’s sixth largest wine-producing region. It offers a diverse selection of internationally recognized wines from both indigenous and international varieties in an array of styles. Stretching from the Tyrrhenian coastline inland toward the Apennine Mountains, Tuscany spans multiple elevations, expositions, soil types, and climatic conditions.

More than half of Tuscany’s hillside vineyards are planted with Sangiovese grapes. Historically the region is known for its production of Chianti. In fact, the Chianti zone is the oldest appellation in the region.

Geographical sub-appellations of Chianti include:

These sub-appellations may be featured on Chianti wine labels. Chianti Classico and Chianti Rufina are some of the most distinctive wines coming out of the Chianti area. While the wines must be mostly made from Sangiovese, a small percentage of additional varieties may be used. In the past, white varieties like Malvasia or Trebbiano could be added, though they’re no longer permitted. Native red grapes like Canaiolo Nero or Colorino are still allowed but not commonly added. Bordeaux varieties like Merlot or Cabernet Sauvignon are more likely additions. However, the current trend is to go local and aim for 100 percent Sangiovese from single vineyards, when possible.

Tuscany is also renowned for the Sangiovese-based Vino Nobile di Montepulciano, which is made near the hill town of Montepulciano. These wines show similar characteristics as Chianti Riservas. Another Sangiovese-based wine, Brunello di Montalcino is a world-class red that often vies with Barolo for the reputation of Italy’s finest and most age-worthy wine. It must be made with 100 percent Sangiovese grapes.

But Tuscany isn’t just a red-wine-producing region. There are a number of white wines to be explored, including those made from Trebbiano, Vernaccia, and Vermentino. The region is also known for its dessert wine, Vin Santo, which is made from native varieties (usually white, but sometimes Sangiovese is used) and traditionally served with almond biscotti.

Tuscany is a predominantly hilly region with vineyard elevations rising up to 550 meters above sea level. About a quarter of the landscape is mountainous and a scant 8 percent is officially classified as flat. Approximately 57,942 hectares of the region’s nearly 23,000 square kilometers is under vine.

The main wine-growing areas of Tuscany include:

Sangiovese grapes thrive in the interior hillside vineyards in the Chianti zone that runs between Florence and Siena, as well as in the Montalcino and Montepulciano areas, where its best expressions evolve. Cabernet Sauvignon flourishes in the warmer areas along the Tuscan coast.

Soils in Tuscany range from soft and crumbly, marl-like clay-limestone and dense sandstone in the Apennine foothills to sandy clay around San Gimignano and gravelly clay and sandy soils in the Bolgheri and Maremma areas.

Tuscany’s climate is Mediterranean with dry, hot summers; warm springs; and mild, rainy autumns and winters. Variations in altitude, exposition, and diurnal temperatures in the foothills contribute to climatic conditions that help balance the sugar, acidity, and aromatics in the grapes—primarily Sangiovese—planted there. Coastal areas like Bolgheri and Val di Cornia tend to be more temperate.

Organic and biodynamic wine practices continue to trend around the world, particularly in Europe. Tuscans are among the wine producers that are increasingly embracing sustainable practices in the vineyards and the cellar. The focus on native grapes and terroir-driven wines is also on the rise, both globally and in this region.