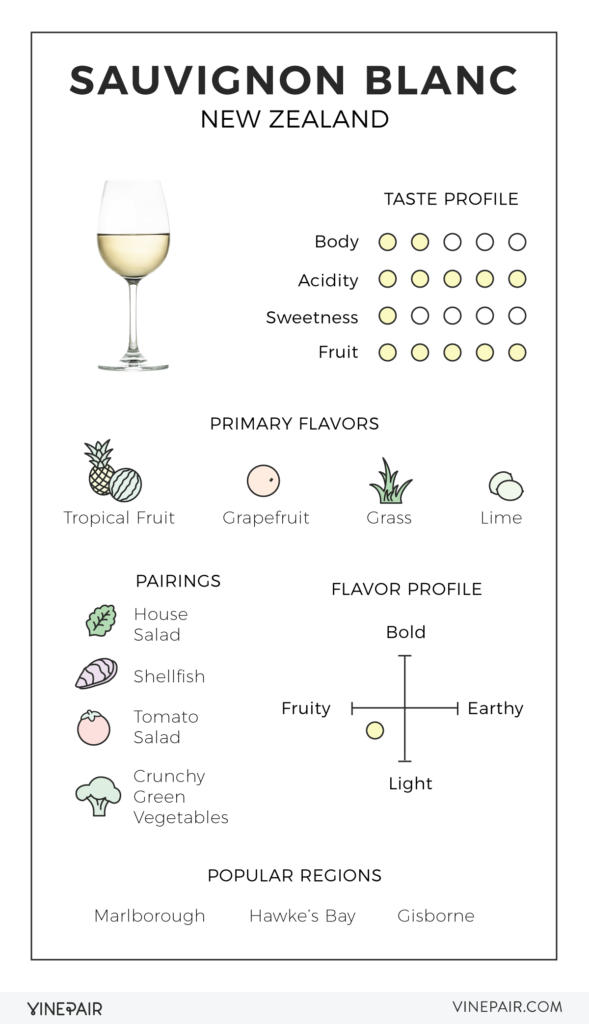 Sauvignon Blanc is a white-wine grape from western France, now successfully grown in emerging and established wine regions all over the world. While the grape may be more readily associated with the Loire Valley (for its pivotal role in Sancerre and Pouilly-Fumé), it is more likely to have originated from Bordeaux, where it is typically blended with Semillon.

In the late 20th Century, a new region began to gain a reputation as one of the great Sauvignon Blanc regions of the world: Marlborough, at the northern tip of New Zealand’s South Island. The rapid development of the Marlborough Sauvignon Blanc is one of the most dramatic events in the world of wine. The intense and readily accessible flavor of a classic Marlborough “Savvy” (as it is colloquially known in that part of the world) has captured a vast market around the globe, from the United States and Canada to the UK and northern Europe, Australia and Japan. In 2015, Sauvignon Blanc accounted for around 85% of New Zealand’s wine exports.

Outside France and New Zealand, the variety has been relatively successful in New World regions such as California, Chile (particularly the Casablanca and San Antonio valleys) and South Africa. Even in Australia the variety can thrive in the cooler coastal areas of the south. In Europe, the cool, sunny sub-alpine slopes of Alto Adige and Friuli in northern Italy produce high quality Sauvignon Blanc, which is used in blends with native varieties like Friulano or on its own.

The key selling point of Sauvignon Blanc is its straightforwardness – the flavors are rarely hidden away in the background. Also, there is a particularly close correlation between the perceived flavors and their descriptors, making Sauvignon Blanc an ideal wine with which to begin wine-tasting lessons.

Classic Sauvignon Blanc aromas range from grass, nettles, blackcurrant leaf and asparagus to green apples and gooseberries, and to more esoteric notes such as cats’ pee and gunflint. The latter is a sign of a wine from Pouilly-Fumé, where the struck flint aroma (known there as pierre à fusil) derives from the presence of high levels of chert in the local limestone soils. This effect is so pronounced and consistent that Sauvignon Blanc was once widely known as Blanc Fumé in this part of the Loire.

When combined with Semillon, as it is in most Bordeaux blanc, Sauvignon is found in some of the world’s finest dry white wines. Although generally a minor component, it also plays an important role alongside Semillon in Sauternes, the closest the variety gets to the top end of the wine spectrum. Since the 1970s, this pairing has become the staple white blend in Australia’s Margaret River region.

A relatively robust, vigorous vine (which explains its popularity with viticulturists), Sauvignon adapts readily to all kinds of growing environments. Because it ripens early, it can be grown in relatively cool climates – its Loire homeland being the most obvious example – while its naturally high acidity allows it to retain a level of freshness even in warmer areas. However, to achieve the true, forward zing that best characterizes Sauvignon Blanc wine, a cooler terroir is needed, ideally with persistent bright sunshine and a dry harvest period.

Strange as it may seem, bright, green Sauvignon Blanc has much in common with dark-skinned Cabernet Sauvignon, and not just in the name and region of origin. The bell-pepper and asparagus flavors detectable in wines of both types are down to the methoxypyrazine flavor compounds in both varieties. Also, they are both vigorous growers that produce generous yields and are inclined to produce overly dense canopies in cooler climates. The two varieties are, in fact, genetically related; Sauvignon became the parent to Cabernet Sauvignon after a natural crossing with Cabernet Franc in an 18th-Century Bordeaux vineyard. Both parent and offspring have now become two of the most widely planted vine varieties in the world.

Food matches for Sauvignon Blanc include: