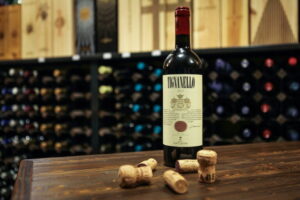 Antinori is a Tuscany-based wine company that is one of the largest and most prominent in Italy. The Cianti Classico region forms the focus of operations, though the company has interests in various countries, and around 20 million bottles are produced annually across 150 labels.

The history of the house dates back to the 14th Century, after the silk-weaving family moved to Florence and began to cultivate vines. In 1900, Antinori added the Tignanello vineyard to its portfolio, and Niccolò Antinori and his son Piero began to experiement with then unheard-of winemaking techniques and grape varieties. The first vintage of Tignanello was released in 1971.

Tignanello is the most famous of all Antinori’s wines. The vineyard of the same name extends to 57 hectares (140 acres) on limestone-rich soils on a southwest-facing slope 1150-1300ft (350-400m) above sea level. This wine was the first in the region to combine Sangiovese with non-traditional international varieties, and to omit white grapes, hence being classified as a Vino da Tavola. It is now a Toscana IGT. A typical composition for recent vintages would be 80 percent Sangiovese with 15 percent Cabernet Sauvignon  and 5 percent Cabernet Franc. Tignanello is aged for 12-14 months in a mix of new and year-old French and Hungarian oak.

Antinori has several other vineyard holdings in Tuscany. The Badia a Passignano abbey in Sambuca Val di Pesa has been the site of vineyards for at least 1000 years, and has 56ha (140 acres) planted mostly to Sangiovese with some Cabernet Sauvignon and Syrah. It produces a single wine classified as Chianti Classico Gran Selezione. The Pèppoli vineyard is located three miles to the northeast of Tignanello and has 50ha (124 acres) of vines.

In Montalcino, the Pian delle Vigne estate has 65ha (161 acres) planted to vines, while on the Tuscan coast in Bolgheri, the Antinoris own the large Guado al Tasso estate. The extensive 300-ha (750-acre) vineyard produces a flagship Bordeaux-style blend of the same name, plus a range of other whites and reds. Over the border in the Orvieto region of Umbria, Castello della Sala – acquired in 1940 – has 140ha (345 acres) of vines producing a range headed by Cervaro della Sala (90 percent Chardonnay, 10 percent Grechetto). International interests include Antica Napa Valley and a controlling stake in Vitis Metamorfosis in Romania.