The north of Italy, and the city of Parma in particular, has been distinguished since the end of the 19th century for the development of an major national center for the production and industrial processing of tomato. In the last decades, the area where the industrial tomato is cultivated has expanded into neighboring areas due to the conversion of other crops’ farms and the emergence of processing farms.

The district area includes the Regions of Emilia-Romagna, Lombardy, Veneto, Piedmont and the Autonomous Province of Bolzano.

Italy is a world leading processed tomato producer, representing approximately 13.6 percent of the global production and 49 percent of Europe’s production, with a sector turnover of more than €3.1 billion. Acreage dedicated to processed tomatoes amounts to nearly 60,627 hectares split mainly among the central-southern provinces of Foggia, Caserta, and Potenza, and the northern districts of Parma, Ferrara, and Piacenza. According to the latest data released by the National Association of the Canned Vegetables Industry (Anicav), Italy’s processed tomato production totaled 4.6 million metric tons (MMT) in 2018, 11.5 percent down from the previous year. This was due to planted area reductions (-5.9 percent), spring rains, and sudden alternations of temperature during the summer. In 2018, processed tomato production reached 2.4 MMT in northern Italy (-10.2 percent over 2017) and 2.2 MMT in the centre-south (-12.7 percent over 2017). 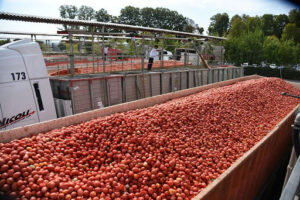 Generally, conditions in Italy allow for production of tomatoes throughout the year, although the bulk of the processing takes place between the months of July and December. Growing conditions vary substantially between the different regions. In the South, water is plentiful but expensive to use. Many farms utilize drip systems or sprinklers. Growers have set up cooperatives, which are part of larger producer organizations, whose main task is to make joint offers, sign contracts with processing firms, supply seeds, fertilizers and other treatments, and own harvesters.

Production in the North is completely mechanized and hybrids are predominantly used. The majority of the plantings are plug-seeding transplants. Direct seeding is rare and only used for the cultivation of paste tomatoes, which are sown with precision machines using coated seeds. For peeling tomatoes, the acreage is planted with plug seedlings. Tomatoes for paste are all machine harvested, but those for the production of canned tomatoes are mostly harvested manually.

The Italian tomato processing industry produces passata, sauces, and pastes and is entirely separate from the fresh-market industry. Specific characteristics differentiate the two types of tomatoes: fresh market varieties are juicier and harvested prior to being ripe, while processing varieties contain higher percentages of solids, are vine ripened, and typically have a thicker skin.